Why Are AEG’s so Popular in Airsoft? 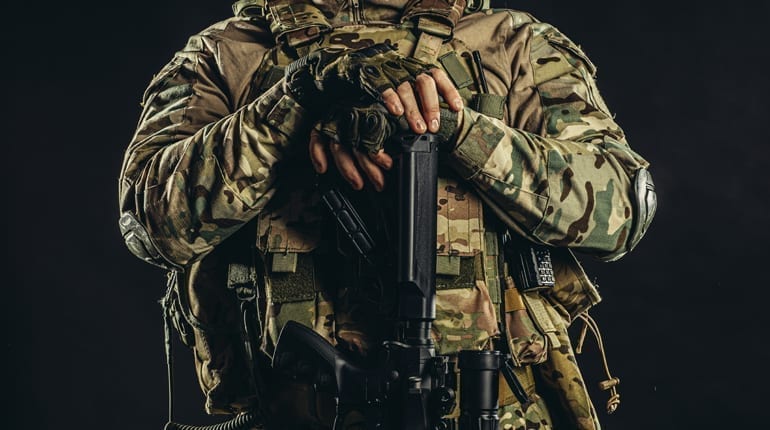 While the term ‘airsoft guns‘ is all-encompassing, it doesn’t take into account the various different types of airsoft gun under this umbrella term. Just like cars can run on either gas, diesel, or electric now, airsoft guns can be powered in a number of different ways. Generally, you’ll see three main designations – AEGs, GBBs, or Spring powered. Furthermore, there are a number of tank-powered offerings now such as Polarstar products, as well as simpler C02 canister offerings.

Of these various different methods of power, electric is by far the most popular with electric powered airsoft guns known as AEGs or Automatic Electric Guns. AEGs, or Automatic Electric Guns, run off of a range of different battery types and sizes. They make use of a motor-driven piston assembly to shoot a projectile. In long-form, this is achieved through the use of an electric motor that drives a piston head. In turn, said piston head compresses a spring, creating a build-up of air which forces the BB along the barrel.

AEGs have long ruled the airsoft market – at least in regard to the sport of airsoft. But what exactly makes them so popular? This month we take a look at five reasons as to why AEGs are so popular within the airsoft market and why you should consider buying an AEG over other offerings.

AEGs are generally pretty easy to use. The end. No, seriously…  A lot of the clamor surrounding AEGs simply comes down to them being user-friendly. You simply plug your battery in, slam a magazine in the mag well and off you go spraying BBs at anything that dare crosses your line of sight.

Because of their ease as well, they’re generally fairly straightforward to take apart and learn the inner workings of, should you be that way inclined. On the flip side, the chances are your local gun tech or the random guy who walks around the safe zone asking if you need any help will know what they’re doing should you break it.

Now having something you can just throw in the garage until you next go to play airsoft is always a benefit, especially after a hard day of running around. And AEGs (to a certain extent) allow for this. Obviously, if you’ve decided to spend the day rolling through the mud or sand then you’re going to want to give your AEG a wipe over, and likewise, if you end up in the water with it, taking it apart and letting it dry is probably a good idea.

Outside of that though, the only thing we’d really suggest is disconnecting your battery after playing and at a push emptying your magazines so the springs don’t compress and leave you with feeding issues. See, low maintenance!

One of the biggest gripes about GBB rifles, or gas blowback rifles, is they suffer in harsh temperatures. Too cold and you’ll find the gas freezes in the magazines. Too hot and your rifle that was chronographed at 350 FPS is now shooting at 500 FPS. AEGs don’t have that issue because… well, batteries don’t care much about the weather.

Don’t be that guy, or girl, who travels miles for an airsoft game and spends most of the day trying to get their GBB rifle working. Invest smart, invest electric!

Another great thing about AEGs is they’re accessible to damn near everyone. By this we mean they’re not going to cost you a fortune – you’re not going to have to lay down a huge amount of money to get started within the sport of airsoft. Too many hobbies are inaccessible due to start-up costs, however, airsoft is fairly accessible to nearly everyone economically.

Obviously, there are other costs such as BBs and eye protection, but other than that you’re pretty set!

One of the best things about AEGs is that they’re hugely upgradable. So let’s say you buy your first AEG, you’re hooked, but you want more performance. You don’t want to invest in a whole new AEG, so what are your options? Well, in reality, they’re endless. If you’re looking for performance, you could change the spring, gearbox, or motor. If you’re looking for your AEG to be more ergonomic, you can swap out the rails, stock, or grip. Want your AEG to look aesthetically pleasing? Well, that’s a whole other can of worms.

In reality, the amount of times we’ve started with an AEG and within a year the only original item left is a stock tube or something is kind of ridiculous – but that just goes to show you how far you can go with upgrading an AEG!