What Are the Best Airsoft Pistols in Call of Duty Warzone 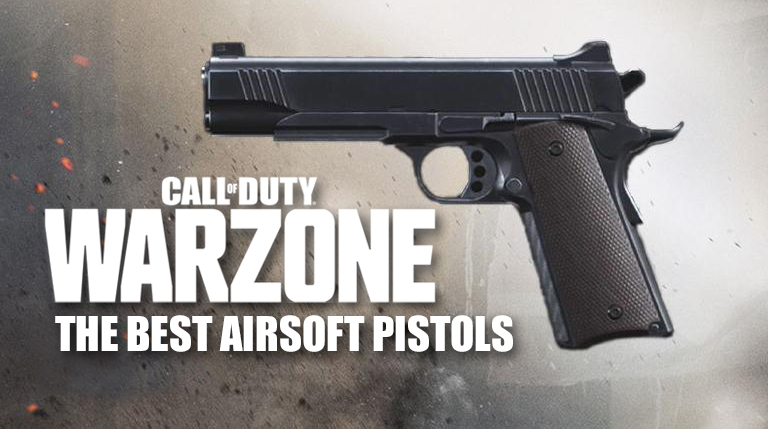 It really isn’t much of a secret that Call of Duty Warzone is by far one of the most popular First Person Shooter games on the market at the moment. Its Free-to-Play model attracts millions of unique players daily, and many gamers clamor in their masses over the foray of weaponry found within the game. Players will spend hours searching for the best guns on the internet in a bid to improve their gameplay.

We’ll be honest; while assault rifles are great fun and will be what you use most of the time while playing airsoft, there’s nothing quite like running out of ammo and having to drop to your pistol in a last-ditch attempt to defend a position or moving through a building with your pistol because your assault rifle is just that little bit too long.

Within Call of Duty Warzone, the list of pistols is endless. Still, we’ve focused on some of our favorites, ranging from ergonomic pistols that you’ll find on numerous skirmish fields through to the ridiculous ‘hand cannon’ that is the Desert Eagle. And, as always, we’ve got three choices for you – all from top manufacturers and found at the airsoft guns section of our website!

Designed by John Browning, the M1911 is the best-known of his designs to use the short recoil principle in its basic design. The pistol was widely copied, and this operating system rose to become the preeminent type of the 20th century and nearly all modern centerfires pistols. The US military procured around 2.7 million M1911 and M1911A1 pistols during its service life. The pistol served as the standard-issue sidearm for the United States Armed Forces from 1911 to 1985, and it was widely used in World War I, World War II, the Korean War, and the Vietnam War. The M1911A1 was replaced by the adoption of the 9 mm Beretta M9 pistol as the standard US military sidearm in 1985.

This is the SR-1911 CO2 blowback airsoft pistol from SRC. The SRC SR-1911 series pistols come ready to go with almost everything you need for shooting. The super durable ABS clam-shell, foam-padded case contains an extra magazine and a speed loader for ultimate convenience. The pistol features a metal slide assembly and lower frame that feels just like the real thing. The heavyweight construction of the pistol adds to the realism, comes CO2-ready, and sends a strong recoil feedback to the shooter after every shot.

This pistol has a great blowback system and full metal construction; this is one of the best 1911 pistols we have seen from SRC. The full metal CO2 holds 27 rounds and fires around 330fps. The pistol also has a fully working safety and pistol grip pad. This pistol also has a hard case for security and a small bag of BBs to get you started. A great-looking pistol that will not disappoint!

The .357 Smith & Wesson Magnum, .357 S&W Magnum, .357 Magnum, or 9×33mmR as it is known in unofficial metric designation, is a smokeless powder cartridge with a .357-inch (9.07 mm) bullet diameter. It was created by Elmer Keith, Phillip B. Sharpe, and Douglas B. Wesson of firearm manufacturers Smith & Wesson and Winchester.

The .357 Magnum was collaboratively developed over a period in the early to mid-1930s by a group of individuals in direct response to Colt’s .38 Super Automatic. At the time, the .38 Super was the only American pistol cartridge capable of defeating automobile cover and the early ballistic vests that were just beginning to emerge in the Interwar period. The .357 Magnum cartridge is notable for its highly effective terminal ballistics.

The SRC 4″ Titan Full Metal CO2 Airsoft Revolver is a solid option between a large and small-sized handgun. This TITAN series has a 4-inch barrel and is full metal construction, with a molded grip for easy loading cartridges. We think this airsoft revolver is one of the best we have seen. To operate this revolver, you will need Co2 Cartridges and high-quality polished 6mm BBs.

There are six shells included in the package that holds one BB to each. Load up all six shells into the handgun and enjoy the realistic rotation of each shot. The rubberized groove grip has an ergonomic design to grasp comfortably when you reach for the draw. This revolver is excellent for any loadout where you are looking to change things up a bit.

The Desert Eagle (colloquially, sometimes Deagle) is a gas-operated, semi-automatic pistol known for chambering the .50 Action Express, the largest centerfire cartridge of any magazine-fed, self-loading pistol.

The design for the Desert Eagle was initiated by Bernard C. White of Magnum Research and Arnolds Streinbergs of Riga Arms Institute. They filed a US patent application for a mechanism for a gas-actuated pistol in January 1983. This established the basic layout of the Desert Eagle. A second patent application was filed in December 1985, after the basic design had been refined by IMI Systems (Israel Military Industries) for production, and this is the form that went into production.

The Desert Eagle is a model which has not had much attention over the years, probably due to Tokyo Marui making such an outstanding replica of it already that no one had needed to bother until now. In usual HFC fashion, this replica offers exactly the same experience as the TM Desert Eagle at a fraction of the price.

The exterior of this pistol is constructed from Polymer with slightly different finishes to the plastics. This Polymer external is built around a rugged alloy frame that keeps everything sturdy and adds a realistic weight, making this replica feel like a true beast in the hand.

This pistol has absolutely blown any misconception we ever had about budget handguns clean out of the water; it scores an easy 10/10 for every field as far as we’re concerned. Furthermore, it is GREAT fun to use!

On the Just Airsoft Guns category product pages, you can see our full range of airsoft guns, airsoft rifles, or airsoft pistols. We also have a large number of BBs and airsoft accessories, all at great low prices.