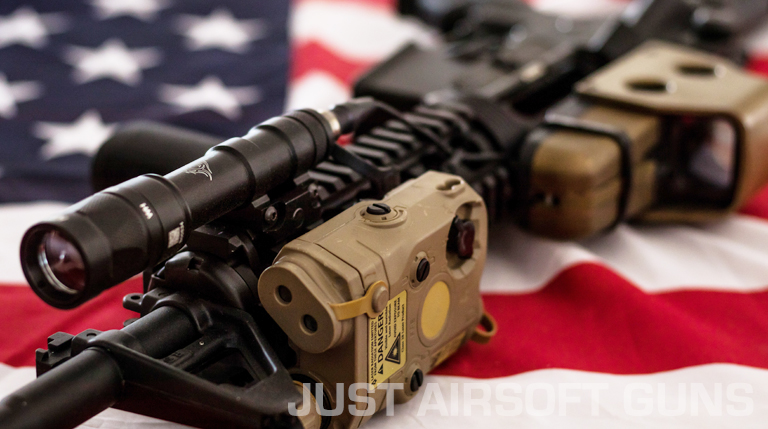 Before we move into the realms of complex tech jobs, we wanted to touch on something we’ve seen done wrong far too many times – circuits. The wires inside your airsoft guns are its veins – providing a circuit loop that powers your much loved AEG. Contrary to popular belief, the circuit inside AEG airsoft rifles is not a complex one; it’s a single switch and a motor connected in a loop to a battery. They layout of the circuit can cause a little confusion, but once you get your head around what is happening, it’s very basic electrical engineering. Despite its simplicity, this circuit is essential to a gun’s operation and performance and they are only as good as the weakest part in the chain, just like any circuit. You will never get any increase in velocity by upgrading your battery but gains in efficiency, longevity, battery life, rate of fire and trigger response are all on offer. So what should you be looking for in this basic circuit?

The wiring inside your gun is essential and many companies will have you believe gold, silver or any other fancy looking stuff is critical to performance, but it’s not. The look of the wiring is unimportant aside from the positive side being red and the negative side being black, that just makes things easy. The best wiring is multi-stranded, silicone insulated and as thick as you can get away with. 16AWG is preferred. Some manufacturers go with less strands, a more rigid wire and thinner insulation and although this gives you more space to route the circuitry through the gearbox and inside the gun, it can mean you have wires that get kinked and the strands inside become snapped. If the strands are broken, you’ll end up having to replace the circuit. As much of a pain as it can be to trace through a gun as you assemble it, softer, more pliable wiring will last longer and you should never put any strain on it.

Just like plumbing, a good circuit should be as short as possible and have as few joins as possible so avoid excess wiring, connectors and joins. These are all potential failure points and will lead to more resistance in the circuit meaning you get less grunt from any given battery, and more heat. Make sure every join is soldered with a good joint and properly insulated with heat shrink, no excuses!

An AEG circuit is fairly simple when it comes to the amount of switches it uses, because it’s one. However, we’re more likely to refer to it as a trigger, as opposed to a switch – but it is a switch nonetheless in the grand scheme of electronics. In recent times this rudimentary piece of kit has been replaced by mircoswitches and MOSFETs but your basic gun will still use the simplest and cheapest switch block. It’s a strange component because it’s one that either works or it doesn’t and generally, unless you are changing over to a microswitch or MOSFET, it’s not worth swapping out until it fails. Potential problems to look out for though are poor soldering, as usual, burnt up contacts and a sticky, rough engagement and disengagement.

Avoiding joins and connectors is the name of the game in a good circuit, but it’s just impractical to remove them all. It’s no unheard of to solder the wires onto the bottom of the motor and indeed, some technicians will do this from time to time to avoid resistance in the circuit and to prevent the spade connectors from vibrating off of their terminals, but it does make the dismantling of the gun a little more labour intensive.

The “spade” connectors that attach the wiring to the motor terminals can be very frustrating. They are bent at 90 degrees and can distort, weaken and snap after a lot of use. The more you push them on and off of the motor terminals, the looser the join will get and without a tight fit, you ‘ll get arcing, carb’ing up and resistance. In a worst case scenario the connector will fall off of the motor stopping the gun dead just when it’s least convenient.

The other critical connectors within the circuit are the ones between the battery and the rest of the gubbins. It’s the one that you need to frequently attach and detach and so it needs to be pretty robust. In many applications it also need to be pretty small. Oh yeah, and it also needs to be able to handle a decent amount of current and give a solid, resistance free connection.

Fuses are a contentious point, some tech preferring to leave them in, others ditching them as a matter of course. Generally, we’ve never found them to be anything more than a frustration and we’ve never experienced any ill effects from not installing them. Not only will you save a little space but you’ll also further simplify the circuit inside your gun.

The insides of an AEG really aren’t complex. At most they’re a few hours away from understanding, and at best, you’ll pick it up fairly quickly. Due to its simple nature, there really is fairly little you can mess up, but as with anything, take your time and try to make it as clean as possible. With an understanding of the circuit within an AEG, future work will become much easier, so have a play around and try to work out what’s what for future JBB USA blogs!