Gas Blowbacks vs AEGs – the Pros and Cons 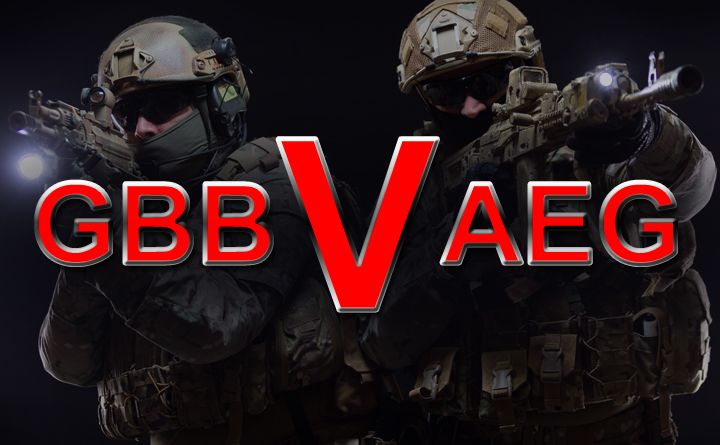 Gas Blowbacks vs. AEGs – the Pros and Cons – while the term ‘airsoft gun’ is all-encompassing, it doesn’t consider the various types of airsoft guns under the umbrella term. Just like cars can run on either gas, diesel, or electric now, airsoft guns can be powered in several different ways. Generally, you’ll see three main designations – AEGs, GBBs, or Spring powered. Furthermore, there are a number of tank-powered offerings now, such as Polarstar products, as well as simpler C02 canister offerings.

While AEGs (Airsoft Electric Rifles) are definitely the most popular, GBBs (which stands for Gas Blowbacks – Airsoft Gas Rifles) have grown in popularity in recent years due to advances in technology. Gas pistols have long been in use; however, gas rifles were plagued with issues in their early years due to temperature changes. Users would find that the gas would freeze in cold weather, causing reliability issues. In contrast, the gas would heat up in hot weather, causing issues regarding FPS (with GBBs firing ‘hot’ – essentially meaning they would exceed FPS limits).

One of the questions we get asked the most here at Just Airsoft Guns USA, though, is very much related to these two different types of airsoft guns, and as always, that question is – which is best? Now a lot of this will come down to personal preference. For example, GBBs are far more realistic in their approach as standard; they require you to make use of the bolt release, the magazines hold BBs to a more real-world level (in the fact that most GBBs only allow for 30 BBs to be loaded in) and they sound a whole lot better. Meanwhile, AEGs are much easier to maintain, are generally a lot cheaper, and are easy to upgrade should you choose to. So with this in mind, this month, we’ll be looking at the pros and cons of both AEGs and GBBs!

The biggest selling point for GBBs, in our opinion, is the fact they are far more realistic than their AEG counterparts (excluding PTWs – or personal training weapons). GBBs function essentially like real firearms, with the user having to ‘cock’ the GBB using the charging handle and press the forward assist.

Furthermore, due to GBB magazines having to house a gas tank, ammo limits are much smaller – with the majority being IRO 30-60 bbs per magazine. Therefore, for those of you looking for a realistic airsoft experience, looking towards a GBB might be the perfect idea!

Somewhat linked to the realism aspect, GBBs are insanely easy to strip down compared to their AEG counterparts as they do not make use of a gearbox. Instead, These gas guns use an internal canister (usually within the magazine) that, upon trigger-pull, releases the prefilled bottled gas via a series of valves to propel the pellet and generate a blowback, which simulates recoil and cyclically loads the next shot.

While we cited this as a potential problem in earlier GBB rifles, being able to essentially change your FPS without having to change any internal parts is a massive bonus in some regards. Due to GBBs being powered by gas, the user simply needs to change the gas used to adjust the FPS. This becomes highly useful when living in America, with different states often having different FPS limits.

Furthermore, it allows you to essentially change the use of your GBB. Many people will have various different front receivers and rails to swap in and out, and the ability to vary FPS based on gas allows you to get a bit more creative. For example, simply run ‘green gas’ if you want to use your GBB as an assault rifle. However, if you feel like a day of sniping, you could easily turn what was an assault rifle into a DMR (designated marksman rifle) by using another gas.

One of the biggest cons of GBBs is the fact that not all of them will work all year round. While there have definitely been some impressive innovations with some GBBs (see the Tokyo Marui GBB range), most of them will be very temperamental during colder months. You’ll no doubt end up in a situation where you’ve spent a whole heap of time advancing on an enemy position for your GBB to then vent its gas, and you end up sitting there somewhat embarrassed.

GBBs are definitely more expensive than their AEG counterparts. Not only are the base rifles themselves more expensive, but the magazines can cost an absolute fortune at times. Furthermore, if you take into account that your magazines only hold IRO 30 BBs, you’re gonna want at least five unless you’re planning on constantly heading back to spawn to reload. That’ll cost you around the price of a standard AEG…

AEGs are definitely the most cost-effective option to get into airsoft. A good entry-level platform will cost you no more than IRO $250, which’ll keep you going for a while. Furthermore, AEGs aren’t expensive to buy things like magazines for – you’ll find many companies that offer packs of magazines at a reasonably cost-effective price, meaning you can get yourself fully kitted out for a reasonable price.

Should you invest in an entry-level AEG and then realize you want a little bit more firepower, AEGs are great because you can upgrade them fairly easily. Nearly every part within an AEG is upgradeable; if you want more accuracy, you can buy a tight bore barrel. More rate of fire? A simple motor change or a more powerful battery will give you that. Want a little bit more realism? A MOSFET can offer a range of changes that will do that.

AEGs are very much easier to maintain than their GBB brothers. Many airsofters simply want to get out to their local skirmish field, play a bunch of airsoft, then throw their weapon of choice in their gun bag afterward. Thankfully, AEGs allow for this. We can count numerous times that we’ve taken an old AEG out of the JBBG armory for a run-around, and it’s been absolutely fine after months of neglect.

Now, batteries aren’t exactly hard to keep charged, but sometimes you simply forget to charge it up the night before. If you don’t have a spare, this can be an issue. While most sites will have charging capabilities, this takes an hour or so of precious airsoft time away from you. Obviously, this is a reasonably easy fix, but it’s something to keep in mind compared to GBBs

For all the advantages of an AEG, you certainly lose a level of realism compared to a GBB. While a lot of this can be rectified with simple changes such as using low-capacity magazines (giving you a more realistic ammunition limit) or by installing a MOSFET to add a level of customization, you lose things such as recoil (unless you’re spending more money on an AEG with a recoil system), and things such as having to release the bolt when loading a new magazine.

On the Just Airsoft Guns category product pages, you can see our full range of airsoft guns, airsoft rifles, or airsoft pistols. We also have a large number of BBs and airsoft accessories, all at great low prices.